I really like RU-PR, and would wholeheartedly embrace it as our electoral system provincially and/or federally. However, there may be those who would prefer a system that was simpler to explain (perhaps noting that the simplest to explain PR system may be the most likely to win a referendum). I therefore created a variant of RU-PR that I call British Columbia Proportional Representation, or BC-PR for short. This proposed made-in-BC system is uniquely tailored to BC’s electoral map.

RU-PR uses a ranked ballot across the province, with single-member ridings in rural areas to keep them smaller, multi-member ridings in urban areas to keep them more proportional, and a small top-up of 10% of elected members coming off of party lists. The proportionality of the urban ridings means very few members have to come off of party lists to make an overall proportional result. A great system, but you have to educate a voter on three other systems (the Alternative Vote, on STV, and on MMP) to explain it.

My BC-PR proposal is the same system in every regard but one, it removes the ranked ballot. This means that the rural ridings remain first-past-the-post, the multi-member urban ridings become SNTV which retains a high degree of proportionality (and also retains the small number of top-up MLAs required to make the result proportional).

Why make such a small change at all? Because it maintains most of RU-PR’s proportionality, but with a reduction in change to how votes are cast and counted. The rural ridings remain first-past-the-post, so that’s very easy to explain. The urban ridings still vote like first-past-the-post (each person gets a single vote for a single candidate with no complicated counting), but become more proportional and give voters more choice thanks to being multi-member ridings. What do I mean by more choice? Under first-past-the-post you might like a party but dislike that party’s candidate in your riding, but under either RU-PR or BC-PR voters would typically have 2 or more candidates from major parties to choose from meaning they’re more likely to end up with both a party and a candidate that they like.

The likeliest way BC-PR would be implemented though would mean that nothing would change for rural BC voters, and that very little would change for urban BC voters. Local representation would be preserved, proportionality would be added, and no complicated vote transfers would occur that are hard to explain to your grandmother.

Importantly, this system would put every riding in play. No more do you have “safe ridings” that a party takes for granted because they’re in strong in that area, or “no hope” ridings where a party that’s weak in an area feels forced to ignore. Our current system weakens democracy by making all parties focus on a small number of “swing ridings”, and the opinions of voters in those ridings are effectively more important than the opinions of voters elsewhere. Under BC-PR, with a tiny amount of change to how British Columbians currently vote, every vote in every riding would now count equally because of the proportionality of the urban ridings and the existence of the small number of top-up seats. 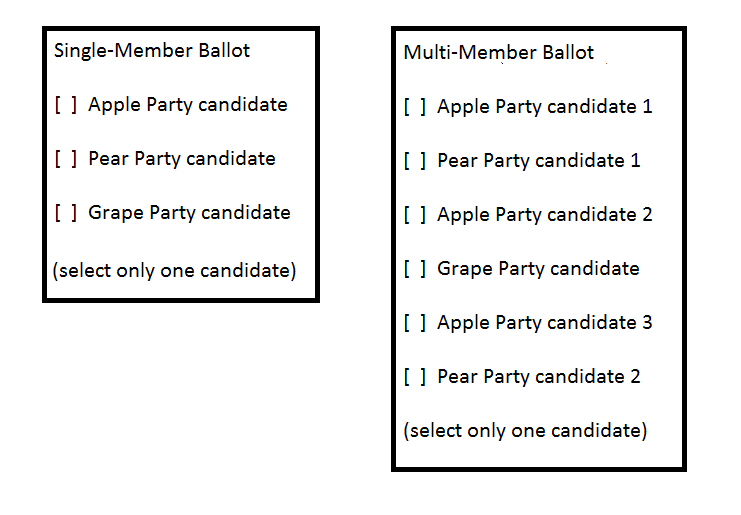 In a rural area, ballot would be exactly the same as they are now. In an urban riding, you would still vote the same but you’d have more choice in what candidate you wanted to place your single (non-transferable) vote with. Parties strong in an urban area would run multiple candidates, but each candidate would likely promote themselves in a different selection of neighbourhoods (perhaps a nod to the places they have lived or worked in the riding throughout their life). Urban voters would no longer be faced with the challenge of figuring out which of the ever-growing number of ever-smaller urban ridings they’re in this time around. Vancouver voters for example, rather than trying to figure out which of the 11 Vancouver ridings they were in, would probably be in one of two multi-member Vancouver ridings (likely a Vancouver West riding electing 6 people, or a Vancouver East riding electing 5).

The pros of BC-PR are:

– its simplicity, very little in the voting or counting changes, so explaining it to BC voters and Elections BC’s task in educating people about the system is drastically easier

– if the number of MLAs is increased by 10%, then the first run of this system can be done by grouping the existing urban ridings together, with a plan to re-evaluate them afterward

– the principle of local representation is enshrined in the system in perpetuity, as the number of top-up seats required to make the end-result proportional may actually decline over time as the urban ridings grow in population

– urban ridings growing in population wouldn’t require new boundaries, merely adjustments to the number of MLAs elected in each urban area, which removes one of first-past-the-post’s most complex elements

– independent candidates can contest 90% of the seats

The con of BC-PR is:

– if the number of MLAs aren’t increased by 10%, then an initial boundary commission would be required to draw up new ridings, potentially delaying implementation

A big question is how does this compare to the two forms of PR that most people are familiar with, MMP and STV.

MMP (mixed-member proportional representation) elects most people in “constituency seats”, often about 50-60% of those to be elected come from these and they’re usually elected under first-past-the-post. The remainder (often 40-50% of the elected members) are selected off of party-lists. All three (MMP, RU-PR, and BC-PR) are mixed-member systems, but MMP requires a great many more top-up candidates to be elected since MMP’s constituency seats usually offer no proportionality at all. RU-PR’s innovation (and it is retained in BC-PR) was to make the urban ridings proportional to reduce the number of top-up candidates required, so this is the defining difference between MMP and BC-PR.

STV (single transferable vote) elects everyone from constituency seats, and because multiple people are elected in each one this makes them proportional. STV is actually the world’s oldest form of PR, and one of its best as everyone represents a geographic area, voters have multiple candidates from the major parties to choose from which improves voter choice, and the ballot is ranked meaning if you can say you like this candidate best, that candidate second best, another candidate third best, etc., which usually means your vote is never wasted and will help elect someone (even if not your first choice). I voted in favour of both referendums on BC switching to STV, and would vote in favour of it a third-time if given the chance.

However, both Horgan and Weaver have suggested that we may not get that chance as STV isn’t the preferred system of either of them, with both leaders citing that the vote transfers (which transfer your vote in part, not in whole) are complicated to explain. STV also requires multi-member ridings, which means rural ridings at least double in size. The former shouldn’t be a concern in my opinion, as counting complexity shouldn’t matter to the voter IMO. As long as the voting process is simple, then the under-the-hood elements ought to be interesting only to a small few political geeks like myself. The latter concern isn’t really a problem IMO, as a popular party in an a large multi-member rural riding would run multiple candidates and divvy up the riding between themselves to avoid overlap. Nonetheless, concerns about counting complexity and rural riding size persist, so BC-PR has been designed to address them head-on. Rural ridings would stay approximately the same in size, and there’s the potential for rural regions to gain significant representation from the top-up seats too. Counting complexity is completely eliminated thanks to non-ranked ballots, and people voting with one-person/one-vote as we do now. BC-PR couldn’t be simpler. You walk into the voting booth, select a single candidate, mark an “X” on a ballot, and you’re done. Counting is similarly simple, the top candidate in each rural riding is elected, the top few candidates in each urban riding are elected, and a small top-up layer guarantees proportionality and all the good that it does for democracy.

Ultimately, though like many PR advocates I have my favourite, I’d be happy with any of the proportional systems mentioned in this article. First-past-the-post weakens democracy by making the opinions of voters in swing ridings more important than the opinions of voters elsewhere, and by wasting votes that never elect anyone, both of which undermine the principle that all voters and all votes should be equal. Proportional representation in all its forms improves democracy by forcing parties and candidates to work together across party ideological lines, rather than the first-past-the-post status quo of parties focusing only on “wedge issues” and “swing ridings” in the hopes of winning that 35-45% of the vote necessary to get all the power. Polls show a majority of British Columbians agree with me that PR would be better, so it’s just about finding a system that’s easy enough to explain that they will understand it and embrace it, and I believe that BC-PR is it.